Last week, five members from our tech team went to a cabin up in the mountains on a "bootcamp". The idea was for us to be able to focus, undisturbed, on a major task during these days - social media integration.

The task was to integrate QBank with different social medias, such as Facebook, YouTube and Flickr etc. To accomplish this, we had to think of the smartest possible solution that fits our product. The idea was to create a common interface for all social media types where we treat each account in each social media as a publishing channel. Not all types of social media use the latest OAuth authentication standard. Some services have complete "helper libraries" that you simply require via composer. These packages handles authentication more or less automatically, while others use older authentication methods with complex handshakes back and forth to produce a valid access token. This is just the beginning of the challenge - there are different types of access tokens that are used for different kinds of operations, and they also have different lifespans. The lifespans of these access tokens can't be trusted since they may be invalidated at any time. We approached this problem by making sure we get a long-lived access token and then lets QBank store and manage them. Then during development we can assume that we always have a valid access token, however, we must use extensive error handling due to invalidation or altered privileges from the external site.

Although we love to program all day long, sometimes we also need to get out to see the daylight and breathe some fresh air. One day of our stay was reserved for a trip by dog sled as well as a safari by snowmobile. First out were the snowmobiles. Just two of us had driven one of these before, so it was in a tense and excited mood we sat down and started the engines. At first the ride was shaky and groovy, but soon we learned to relax and “go with the flow". After we had crossed some snowmobile trails and ski tracks, we started to pick up speed and could really see what these machines were made of! This experience was absolutely incredible! After some sharp turns, racing and laughs, we stopped on top of a mountain where we had the opportunity to take some photos of this awesome landscape.

Soon we were back at the starting point. This is when we had planned to eat lunch, but 15 minutes later we had to be at the next event - the dogsleds. We asked about directions and with empty stomachs we threw ourselves into the car and headed for the next adventure. Since none of us had ever traveled by dogsled, we didn’t know what to expect. Once there, we were divided into groups of two and got a quick tutorial on how to guide the dogs. They also gave us a few hints, like "when the lead dogs stops to defecate, you have to slam the break - otherwise there will be a lump of the entire span", and "keep the distance to the dogsled in front of you, there might be a violent brawl between some rival individuals if they get too close". 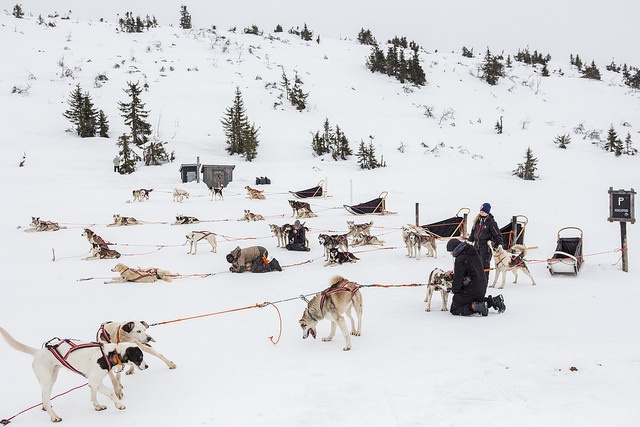 The dog teams were firmly tied when we took our seat, then one of the guides came forth and gently untied the cord. We were amazed by the power these dogs possesed as they went off with us! Despite that, you sometimes had to help them out and push the sled at the very steepest sections. We went up the mountain until we arrived at a shelter. Once there we could finally eat our well shaken and slightly mashed lunch. We also got the chance to pet our dog teams. They are mostly of a breed type called Alaskan Husky, a mongrel dog with much Pointer as well as Vorsteh. They are interbred with gun dogs, with the reason to make them more calm as it gives us more comfortable rides. Soon it was time to head back. The ride downhill was of course much quicker and we had to break a lot to avoid instability. A span in front of us even turned over in a sharp corner! However, there was no danger to either dogs or humans as the sleds are light and the snow soft. Before we knew it we had returned once again to the starting point.

We ended this awesome day by paying a visit to a sports bar with great food and a few drinks... Well, it didn’t really end there. As soon as we arrived back to the cabin at 8 o’clock in the evening, we booted up our computers and continued to work. After all, we are computer geeks who love to program!

After a much needed night’s sleep, we cleaned out the cabin and headed back to Stockholm. It was a tired but happy bunch who returned after a 5 hour-drive. Although we already knew we have lovely coworkers, you don't really reflect about that when you're at the office. This has brought us a little closer as a team, and now work feels even more fun!